Same here… Honestly, I am quite lost here.

I tried to sort this out by explicitely adding a cast (mp_rom_error_text_t)to line 131 in modlvindev.c. But that only solves one problem. The next series is in build-GENERIC_SPIRAM/lvgl/lv_mpy.c (where does that file come from ?) Amongst others, one has:

I was able to build an ESP32 firmware by:

This being said, I have not tried that firmware. I’ll dot that momentarily and I’ll keep the forum posted.

I have not tested the firmware extensively. I basically ran a very short test interface using lvgl. It looks as if it works. Fingers crossed

I was able to build an ESP32 firmware by:

I am not at all familiar casting or the C language.
Could you show in more detail your method(s).
It would be immensely appreciated !!!

My workflow was very basic:

What alterations did I perform?

I do not remember how many modifications I made, but there were a lot (50-ish? in about half a dozen files, some of them generated: those in build-GENERIC_SPIRAM…)

Man aren’t you the ambitions one !!
50-ish?
Can we expect an update any time soon ??
Is this a one-time thing or on every build?

@fstengel -
lv_mpy.c is a generated file.
If you don’t want to change it on every build, better change gen_mpy.py which contains the templates from which lv_mpy.c is generated.

Yes, I just discovered that. “only” 8 thingies that need to be changed. Being a noob with git, I’m not quite sure on howto submit a patch/diff to cover the modifications. However lv_mpy is not the only file that needs to be patched. Some seem to be generated (mp_lodepng.c for instance), but I also had to patch at least: modrtch.c, modILI9341.c, modlvindev.c and modxpt2046.c. What’s weird is that those are all drivers.

Since lv_micropython is aligned to official releases of Micropython, it does not make sense to accept patches on the mainline that are not aligned with the supported Micropython release.

But we can probably accept it on a branch, for people who want a more up to date Micropython/esp-idf.

Fair enough. What I could do is describe what I did in order to be able to build lv_micropython with the latest of micropython/master which is quite a few commits ahead of the version found in the lv_micropython github repo.

What I could do is describe what I did in order to be able to build lv_micropython with the latest of micropython/master which is quite a few commits ahead of the version found in the lv_micropython github repo.

If you’d like to update lv_micropython manually, you should be able to clone it and then run the following commands:

It’s quite possible you’ll have to resolve some merge conflicts but that will give you all of the latest changes in Micropython.

I modified the offending files and pushed the whole lot to my repo. You can start with this repo. But your work is not finished.

Now, there are 5 files that are part of the lv_bindings submodule. I can modify them, but I do not know how to push them (and I dare not messing up the lv_bindings repo…) the files are (the root is lv_bindings):

In those files I had to:

As far as I can tell that is all I had to do in order to be able to compile lvgl with micropython/master and esp-idf V4.

And you have to repeat it for the 13 locations you found. Basically insert the (mp_rom_error_text_t) just before the " of the string…

If somebody proficient in git could give me a way of pushing the modifications I did in the lv_bindings submodule, without messing up the original, that would help a lot…

THANK YOU VERY MUCH " fstengel" !!!
I feel much better that I am using the most recent release! 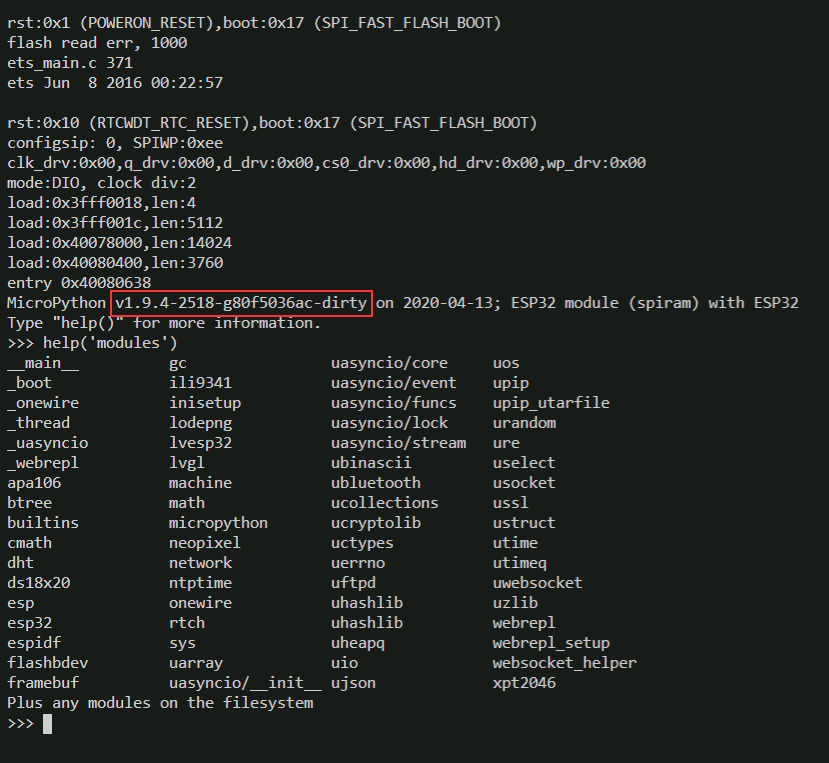 Notice the two differences: the version and the size of the second segment. My board (a M5Stack) does not show the flash read error either.