The way I generated the phrase above is simply using the widget demo and modify one of the phrases into ذكرني لاحقًا and set the font to lv_font_dejavu_16_persian_hebrew.

Can you tell what is the Unicode value of the missing character in its joined form?

It seems to me

is there as your screenshot contains it:

Rather the character below it seems missing:

Is there a unicode character for this complex glyph?

The 0x600-0x6FF range is part of the built in font and I’ve checked that 0x064B is really part of the font. You can also see it if you open the Persian font search for 064b.

So it’s 2 characters on top each other. LVGL supports it, e.g. in Hindi writing a lot of ascent glyphs have negative x offset, which moves them above the previous glyph.

The information that LVGL sees from ً ( U+064B) looks like this:

When LVGL draws the letters the following happen:

The issue I see is that the incorrect form of ق is used because it tries to connect to ً but it there is no rule for it.

Is these kind of accents common in Arabic? If so I wonder how was this is issue not spotted so far.

Anyway, if you agree that this is the root of the issue, it can be fixed in lv_txt_ap.c by skipping these special characters. 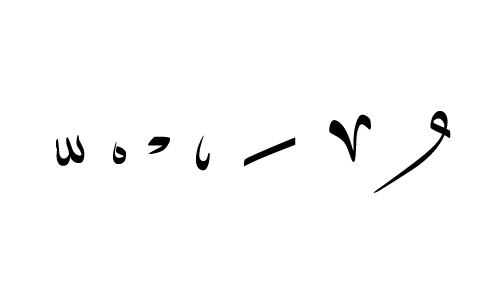 I further tested with other vowels. The image below is a string I copied from the website above without the basic fatha vowel (right) and with the fatha vowel (left).

This is another vowel (kasra) I tested.

After studying how the conjunction works in lv_txt_ap.c, I made a small modification to check and skip if the current or next character is a vowel.
Code below is written inside _lv_txt_ap_proc straight after calculating index_current and idx_next (may need more fine-tuning in the future)

This is the function I made for checking an arabic vowel

Which is much closer to what it’s supposed to look like but the double line is still misplaced at the moment as it should sit directly on top of the double dot. My next question is how and where is the x position retrieved/calculated?

Good news! Can you send Pull request with the changes so far. I understand that it’s not perfect yet, but definitely better than before.

My next question is how and where is the x position retrieved/calculated?

Here are the steps LVGL does:

Let me know, if I can help with debugging or you have found a problem in LVGL.

@kisvegabor
I just made my very first pull request to an open source project so hopefully I didn’t mess up anything. I will have a play around with the drawing some time this week and see what I can find. It’s a great library and I’m enjoying it.

@lin
Thanks for your information. It looks very helpful at understanding how arabic characters are drawn.

The basic vowel characters now look somewhat closer to the expected form, however, the height of the vowel is still not perfect (some are still quite close to the base character and I believe it will require fine-tuning for each vowel).

Then I tested against a really complicated string:
Expected:

It seems like you can have two vowels in a row so I modified the conjunction processing once more to fix that as well as the height calculation to skip the 2nd vowel.

I’ve just merged you PR, thank you very much!

What modifications were required?

The following code is inside lv_draw_letter:

I had to use two static variables next_letter_temp and next_next_letter_temp (the naming is bad I know just so I don’t have to modify the interface of lv_draw_letter as it’s used elsewhere) that capture the next letter and the letter after the next one (only if it sees 2 vowels in a row). The general idea is to calculate the x and y position based on the next character’s width and height. The calculation can definitely be improved but maybe someone has a better idea?

Great! Can you send a PR from this too? It’d be easier to see the changes there.