Error when making the files using ESP-IDF v4.4 and the default branch of LV_MICROPYTHON

Hello!
I got an error when making the files using ESP-IDF v4.4 and the default branch of lv_micropyhton.
First, I open my terminal and active the ESP-IDF with the command:

After that, I go to my lv_micropyhton folder, open the ports/esp32 directory and run the following command:

And when a run:

This problem shows up: 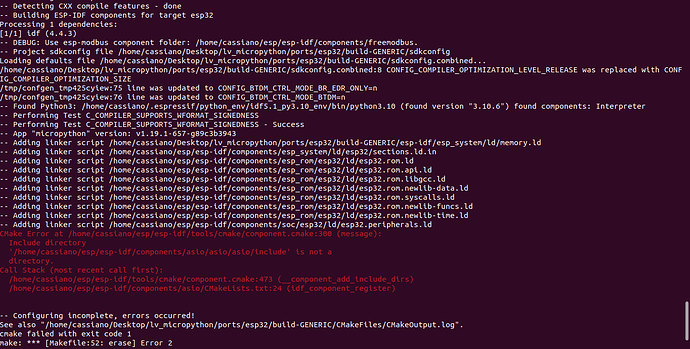 I got a different problem when using the LTS version of ESP_IDF too, and instead of using the make command I also tried running “idf.py build” direct and I got the same problem above.

I don’t think that this matters now, but I’m working on an esp32, with an ili9488 display driver and the ft6x36 touch driver from MAKERFABS.

Someone could show me what I can try to this simple step??
Thanks.

I tried all from the beginning again with lv_micropython, but this time I tried with the UNIX port as they teach on git hub and I had some issues too.
When I run the command: 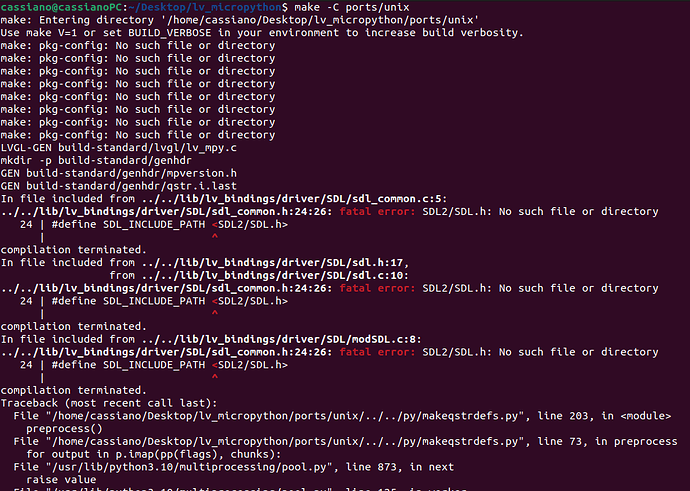 Before this command, all the others worked fine:

Ok, after some work I discover that the problem was the ubuntu version. So now I’m using ubuntu 20.04 and esp-IDF v4.4 and all is working fine with lv_micropython.