How do I use the LVGL library with a PIC24

Hi,
I am in a project with a PIC24FJ1024GB610, in the project I will use a TFT screen with a FT812Q-T driver, and I want to use this library to interface the TFT screen, how could I implement LVGL with these devices? or where I could find information to use in this project? I will show the connections between the driver, the PIC and the screen, could you tell me if it would work with these connections and how to implement it?
Thank you. 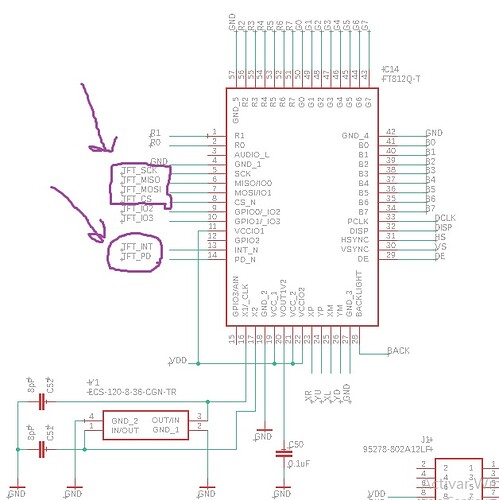 Porting LVGL to an MCU is described in this document: LVGL Docs - Porting

It’s possible that your MCU has a port somewhere out there, but chances are that you have to port it yourself.

As far as the LCD driver specifics, this is also covered in the above linked guide. A few things to note:

When you say you have a driver, does that imply you also have a flush-type function included in that driver for use in SPI mode? This is a function that takes a buffer and coordinates and passes that over SPI into the LCD’s video RAM at a location specified by the coordinates.

Then use/adapt that with LVGL, setting that function as the “flush callback” function. LVGL calls that function when it is ready to draw something on the screen. This function is to be passed to the LVGL display driver on app initialization.

This document tells you more in-depth what you need to provide to LVGL to set up the display driver.

If you need more clarification, let me know.