first of all, thank you very much kisvegabor/Amirgon and contributors for this awesome graphics library and the micropython bindings.

I try to use the release/v8 on ESP32-wSPIRAM with an ili9488 display, but I face some problems and I am stuck at this point. Maybe someone can enlighten me, on what I am doing wrong.

The Problem:
To build the firmware and deploy it on an ESP32 board is no problem (with the LV_CFLAGS="-DLV_COLOR_DEPTH=32"). But when I run a very simple example I don’t see the expected behavior on the display. I see a region that is gray, the lvgl active area. But most of the display doesn’t seem to be used. When I try to put a button then something happens (the orange stuff on the top appears, see the picture). 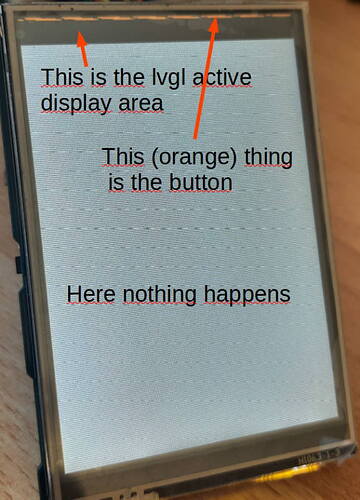 What I did already to try to solve the problem:

Maybe I am just stupid and there is a simple reason for this? Did anyone of you encounter this problem already? I have the feeling I overlook something stupid. Is this a problem with the color code? Thanks for helping me.

I only tested this with ILI9341 on ESP32 and it works well on both v8 and v9 (master).
The ILI9488 driver was contributed by @mhepp - perhaps he would have more ideas.

thank you very much for your suggestions and your time.

This didn’t solve the issue. But it is good to know, that the ILI9341 should work, then I will test it with this once I have a display.

One additional side question maybe:
In the ili9XXX.py is mentioned:

What means “0 means ON”? When I tried it was the opposite, 1 was ON. And this is also reflected in my understanding in the code by:

What means “0 means ON”? When I tried it was the opposite, 1 was ON. And this is also reflected in my understanding in the code by:

Yes, I can see how this can be confusing.

Historically, we only had a backlight parameter to specify the backlight pin (or “-1” to disable backlight). When turning it on, the backlight pin was set from high-impedance to 0 (because I had a P-Channel MOSFET to power it) but others didn’t like this reverse logic.

The problem was that we also needed to keep backward compatibility and couldn’t just flip it to 1.
So the solution was adding another parameter “backlight_on” who’s default value is 0 (on some displays), and stands for the value that should be set to the pin when backlight is turned “ON”.

Sets the level of the backlight pin to 0 in case backlight_on is 0.

Regarding the issue you have with ili9488, I suggest you open a new issue on lv_binding_micropython with all the information you provided here.
I don’t have an ili9488 so I can’t debug this, but hopefully someone else could.